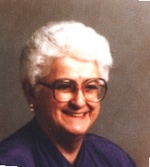 Agnes M. (Paiva) Belong Ferreira 83 formerly of New Bedford passed away Friday March 9, 2012 at Tobey Hospital. She was the widow of John Ferreira and daughter of the late Manuel and Anna (Souza) Paiva. She was a lifelong New Bedford resident. She was a communicant of Our Lady of Guadalupe at St. James Church. She was formerly employed by F. W. Woolworth’s as a Sales clerk for 32 years and at Hazelwood Luncheonette. Mrs. Ferreira was a member of the St. James’ seniors and the St. Hedwig’s seniors and loved doing word search puzzles. Survivors include her sons Alan Belong and his wife Susan of New Bedford, John Ferreira and his wife Barbara of Dartmouth, her daughter Linda Katsoules and her husband Nick of Dartmouth; her daughter-in-law Denise Belong of Fairhaven; 11 grandchildren including Pamela Belong Stuart who was her primary care giver; 14 great grandchildren, many nieces, nephews and godchildren. She was the mother of the late David Belong, James Belong and grandmother of the late Lisa Belong Cody. She was the last remaning sibling of 9 children. Her funeral mass will be said 10am Monday at Our Lady of Guadalupe at St. James Church. Visiting hours are Sunday 3-6pm. Burial will be in Rural Cemetery.

To order memorial trees or send flowers to the family in memory of Agnes Ferreira, please visit our flower store.