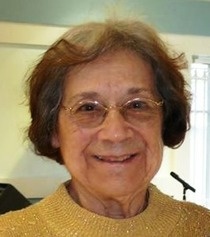 Aida (Rebello) Souza 91 of New Bedford passed away Monday February 15, 2016 at St. Luke's Hospital. She was the wife of the late John C. Souza and daughter of the late Victor F. and Emilia (Santos) Rebello Sr. She was born in New Bedford and was a life long resident. Aida was formerly employed as a seamstress for Madewell Manufacturing until her retirement. Survivors include her granddaughters Kimmy Tripp Mello of New Bedford, Lynne Tripp Phillips of Florida Her great grandchildren Ashley Vieira, SPC Charles R. Phillips 4th, John R. Phillips, Jared J. Mello and the late Adam Rebello. Her great-great grandchildren Kyrin and Kingston. She is also survived by many nieces, nephews , great nieces and great nephews. She was the sister of the late Abel S. Rebello, Victor F. Rebello Jr., Hilda Riley and Joseph F. Rebello. She will be greatly missed. A funeral mass with her cremated remains present will be said 10:30am, Monday March 7, 2016 at Our Lady of the Immaculate Conception Church. Burial will be private.

To order memorial trees or send flowers to the family in memory of Aida Souza, please visit our flower store.