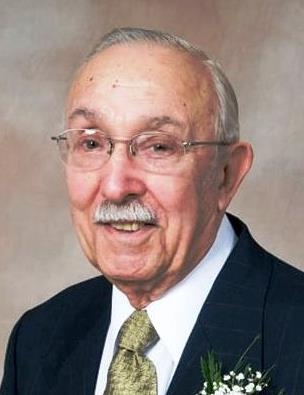 Alfred W. Sylvia Jr. 98 of Fairhaven, formerly of New Bedford, passed away Tuesday October 1, 2019 at St. Luke’s Hospital. He was the husband of Gloria J. (Rousseau) Sylvia and son of the late Alfred W. and Cora Sylvia. He was born in New Bedford and was a lifelong area resident. Alfred was a communicant of St. Joseph-St. Therese Church, for 73 years, where he was awarded the Marion Medal. He was also lector and a member of the choir. He was a graduate of Holy Family High School and the Kinyon Campbell Business School. He was employed at J.C. Rhodes for 43 years, retiring as the general foreman. Alfred served in the United States Navy in the Pacific and was awarded a Purple Heart for wounds he received during the battle for Iwo Jima. He also received the American Area Campaign Medal, Asiatic-Pacific Area Campaign Medal with 8Bronze Stars, Philippines Liberation Medal with 2 Bronze Stars WWII Victory Medal and the Good Conduct Medal. He was a member of American Production Control Society for over 50 years and served in several leadership positions. Alfred was also a member of several senior groups and held several board positions. He was also a member of the Bristol County Philharmonic. Survivors include his wife, his son Alfred W. Sylvia and his wife Lorraine of Rumford, Maine, his daughters Dorothy Manny and her husband Roland of Kingston, North Carolina and Jacqueline Marashio and her husband Paul of New Bedford. 7 grandchildren, 4 great grandchildren, 3 great-great grandchildren also several nieces and nephews. He was the father of the late Alyce Voisine and brother of the late Mary Sawyers, Doris McGurl and Barbara Ellison. His funeral mass will be said 10am Wednesday October 16 at St. Joseph-St. Therese Church. Visiting hours will be 6-8pm on Tuesday October 15, at the Boulevard Funeral Home 223 Ashley Blvd. Burial, with Military Honors, will be in the Veterans National Cemetery, Bourne ,MA.

To order memorial trees or send flowers to the family in memory of Alfred Sylvia Jr., please visit our flower store.