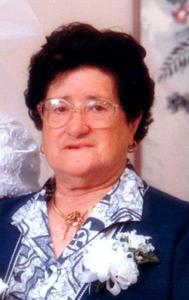 Alice (Costa) Marmelo 97 of New Bedford passed away Tuesday August 20, 2013 at New Bedford Healthcare. She was the widow of Jose R. Marmelo and daughter of the late Lucio and Aurora (Figueiredo) daCosta. She was born in New Bedford and raised in Portugal, returning to New Bedford in 1956. She was a communicant of Our Lady of the Immaculate Conception Church. Mrs. Marmelo was formerly employed as a stitcher at Oliver sportswear until her retirement. Survivors include her sons Antonio Marmelo and his wife Delores of North Dartmouth, Jose Marmelo and his wife Beverly of Acushnet; her daughters Ines Figueiredo Mimoso and her husband Carlos of North Dartmouth, Umbelina Almeida and her husband Carlos of Acushnet, Barbara Carreiro and her husband Luis of New Bedford, Fatima Cardoso and her husband Nelson of Acushnet, Connie Pacheco and her husband the late Antonio of South Dartmouth; her brother Jose daCosta of New Bedford; 18 grandchildren, 27 great-grandchildren, 1 great-great granddaughter; several nieces and nephews. She was the grandmother of the late Nina Figueiredo; great-grandmother of the late Cameron Goulart and Casey Marmelo. She was also the sister of the late Rosa Pinhancos, Dozinda Almeida, Jose Maria daCosta, Andre daCosta, Francisco daCosta and Antonio daCosta.  Her funeral mass will be said 9am Friday at Our Lady of the Immaculate Conception Church. Visiting hours are Thursday 5-8pm. Burial will be in Pine Grove Cemetery. In lieu of flowers donations may be made to Cameron’s Kids 71 Bullivante Farm Rd. Marion, MA 02738.

To order memorial trees or send flowers to the family in memory of Alice Marmelo, please visit our flower store.