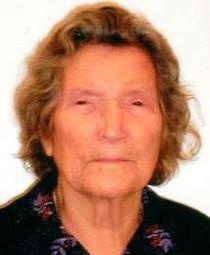 Ana (Paiva) Alves 92 of New Bedford passed away Saturday February 22, 2014 at the Oak’s. She was the wife of the late Domingos Alves. She was born in Ardaos, Portugal and had lived in New Bedford since 1992. Mrs. Alves was a communicant of Our Lady of the Immaculate Conception Church. Survivors include her son Domingos P. Alves and his wife Esperanca of New Bedford; her daughters Rosa Martins and her husband Ricardo of Acushnet and Laurinda Esteves and her husband Jose of New Bedford and her daughter-in-law Isabel Alves; 8 grandchildren, 6 great grandchildren, several nieces and nephews. She was the mother of the late Jose P. Alves and grandmother of the late David Martins. Her funeral mass will be said 9am Wednesday at Our Lady of the Immaculate Conception Church. Visiting hours are Tuesday 6-9pm. Burial will be in Pine Grove Cemetery.

To order memorial trees or send flowers to the family in memory of Ana Alves, please visit our flower store.