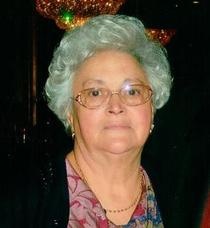 Angelina C. (Calvao) Alves 78 of New Bedford passed away on Wednesday July 2, 2014 at home after a brief illness. She was the wife of Abilio Alves and daughter of the late Jose C. and Maria das Dores Calvao. She was born in Anelhe, Chaves, Portugal and had lived in New Bedford for 45 years. She was a communicant of Our Lady of the Immaculate Conception Church. Mrs. Alves was formerly employed as a stitcher at Cliftex. Survivors include her husband; her brother Joao Calvao of Brazil; many nieces, nephews and godchildren. She was the mother of the late Elizabeth Alves DaSilva, grandmother of the late Adrian Alves Santiago, sister of the late Diamantino Calvao, Joaquim Calvao, Antonio Calvao, Ana Pereira, Ermerlinda Vitorino and Adelaide Almeida. Her funeral mass will be said 9am Saturday at Our Lady of the Immaculate Conception Church. Visiting hours are Friday 5-8pm. Burial will be in Pine Grove Cemetery.

To order memorial trees or send flowers to the family in memory of Angelina Alves, please visit our flower store.