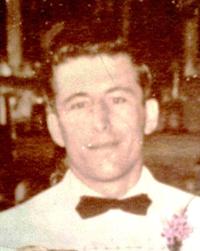 On Thursday July 18, 2013 our dad, Angelo, entered into heaven to join his beloved wife, Mary Pauline and his two sons Joseph and Gerard. He left our lives unexpectedly although peacefully at his home.
He was born August 2, 1923 to the late Emilio and Theresa (Castaldo) DeBortoli. He was predeceased by his sister Elizabeth (DeBortoli) Doyle. Angelo was a plasterer by trade and founder and owner of ARDe Floor Covering. He was a Navy veteran, serving as a Gunner Mate 2nd Class on the USS Cole during WWII. Our dad was a devout Catholic who loved our Lord and was involved in several local churches. His greatest pride was his family.
Angelo is survived by his 13 children; John and his wife Deborah of South Dartmouth and their children Seth, Jahrn, Ross and Adria, Angelo Jr. and his wife Debra of New Bedford and their sons Angelo, Christen, and Robert, Mary Wilbur and her husband Jonathan of Plymouth and their children Travis, Nathan, Katie, Jenney, and Samuel, Antonia Smith and her husband James of Fairhaven and their sons Raymond, Christopher, Anthony  Caton, Trevor and Tyler Smith, Cathy Amarello and her husband Randy of Acushnet and their daughters Breanna and Alexandra, Thomas of New Bedford and his son Thomas, Gina Galarza and her husband Dean of New Bedford and their children Jarrett, Michael, DJ, Luke, and Madison, Margaret DeBortoli of New Bedford and her partner Jorge Silva and her children Jordan and Forrest Cote, Edward DeBortoli of Dorchester, Paul DeBortoli of New Bedford and his daughters Morgan and Lindsay, Christopher and his wife Maria of New Bedford, Angela Cote and her husband Michael of Westport and their sons Michael, Bryce and Ezra, Patrick and his wife Sarah of North Dartmouth and their children Justin and Julianna; 13 Great Grandchildren, Kenzie, Devon, Nariah, Makenzie, Elle, Nolan, Kye, Ethan, Angelo IV, Emily, Ceri, Anaya, Michael Jr, and 2 on the way. Angelo also had 4 Godchildren. Our Dad will be deeply missed and forever in our hearts. His Funeral Mass will be said Monday 10am at St. Joseph’s – St. Therese Church. Visiting hours are Sunday 3-7pm at the Boulevard Funeral Home, 223 Ashley Blvd.

To order memorial trees or send flowers to the family in memory of Angelo DeBortoli Sr, please visit our flower store.