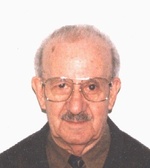 Antonio Leitao 90 of Worcester formerly of New Bedford passed away Thursday March 8, 2012 at UMass Memorial Healthcare. He was the husband of the late Gracinda (Machado) Leitao and son of the late Manuel and Casimira (DeAraujo) Leitao. He was born in Ponta de Lima, Portugal and had lived in New Bedford and Worcester for many years. Mr. Leitao was a handbag designer for the Fairhaven Corporation and was the owner of Marilu Shoes and Handbags, in New Bedford before his retirement. Survivors include his son Carlos Machado and his wife Maria of New Bedford; his daughter Maria Lurdes Leitao-Pina and her husband Dr. Jan Leitao-Pina of Worcester; his grandchildren Brian Machado and his wife Melissa of CT.,  Daniel Machado and Sydney Leitao-Pina; his great-grandson Brian Machado Jr.; several brothers and sisters in Portugal, also many nieces and nephews. He was the grandfather of the late Jordan Leitao-Pina. His funeral mass will be said 9am Thursday at Our Lady of the Immaculate Conception church. Visiting hours will be Wednesday 5-8pm.Burial will be in Pine Grove cemetery

To order memorial trees or send flowers to the family in memory of Antonio Leitao, please visit our flower store.