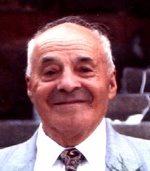 Antonio Pinhancos 95 of New Bedford passed away Saturday April 28, 2012 after a long illness, at Southeastern Mass. Health & Rehab. Center. He was the husband of the late Rosa (daCosta) Pinhancos and son of the late Jose and Carlotta (Sousa) Pinhancos. He was born in Linhares, Portugal and had lived in New Bedford for 46 years. He was a communicant of Our Lady of the Immaculate Conception Church. He was formerly employed as a landscaper in Norwood until his retirement. Mr. Pinhancos was a member of the Centro Luzo Club. Survivors include his son Jose Pinhancos of Portugal, his daughters Aurora Marmelo of Acushnet, Angela Coelho of Acushnet, Adozinda Carvalho of Acushnet, Carmen Bourgeois of Westport; 9 grandchildren, 8 great-grandchildren, many nieces and nephews. He was the father of the late Antonio Pinhancos and Maria Jesus Ribeiro. His funeral mass will be said Thursday at 9am at Our Lady of the Immaculate Conception Church. Visiting hours are 6-8pm on Wednesday. Burial will be in St. John’s cemetery.

To order memorial trees or send flowers to the family in memory of Antonio Pinhancos, please visit our flower store.