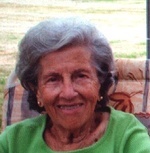 Private funeral services were held for Arminda “Minnie” (Alves) Oliveira 90 of New Bedford who passed away Monday May 7, 2012 at the Sacred Heart Home. She was the wife of William Oliveira and daughter of the late Antonio and Anastasia (DaCosta) Alves. She was a lifelong New Bedford resident. She was the Portuguese Liaison and translator for the Kennedy-Donovan Center until her retirement. Survivors include her husband; her son Bruce Serra and his wife Susana of New Bedford. She was the sister of the late Arlindo Alves. Donations in her name can be made to the Sacred Heart Home.

To order memorial trees or send flowers to the family in memory of Arminda Oliveira, please visit our flower store.