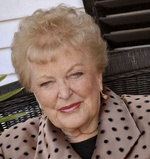 Barbara A. (Threlfall) Pedro, 83, of New Bedford passed away on Saturday April 6, 2013 at New England Sinai Rehab Hospital. She was the beloved wife of the late John A. Pedro and is now peacefully reuniting with him in eternal life. For the past 55 years Barbara resided in the home that John had built for them, where they took great pride in raising their family. She was the daughter of the late Florence (Massey) McAuliffe.

Barbara was employed by the New Bedford Public School Department as a paraprofessional.  She enjoyed teaching the children at the Campbell School until her retirement at the age of 80.  Barbara enjoyed planning monthly lunches with her high school friends and attending weekly meetings with her friends of the Loyal Order of the Moose. She took great pride in treating her children and grandchildren (and half the neighborhood gang) to Hampton Beach, NH every summer. However, Barbara's greatest love of life was following all of her grandchildren’s many activities.
Survivors include her three daughters, Cathy Rodrigues and her husband Paul, Nancy Sullivan and her husband Mark, Judith Frenette and her husband Ronald, all of New Bedford; her brother, Richard Threlfall of Acushnet, whom she held a special place in her heart; her grandchildren Thomas, Matthew and Daniel Rodrigues, Kelley Balestracci and her husband Dante, Katelyn and Tricia Sullivan, Jay, Drew and Chloe Frenette and the late B.J. Haynes; her great grandchildren Anna and Dante Balestracci. In addition, she had many in-laws, nieces and nephews that remained close in her life.
Visiting hours will be Tuesday, April 9th from 2-4 and 6-8 at the Boulevard Funeral Home in New Bedford. Funeral services will be private. In lieu of flowers and because of Barbara's love for animals, it was her wish for donations to be made to the Humane Society Southcoast, 31 Ventura Drive North Dartmouth, MA 02747.

To order memorial trees or send flowers to the family in memory of Barbara Pedro, please visit our flower store.