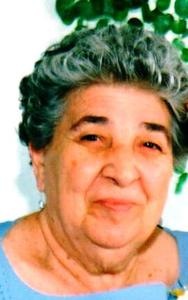 Carolina (Leite) D’Aguiar 96 of New Bedford passed away Tuesday December 3, 2013, at home, surrounded by her loving family. She was the daughter of the late Manuel C. and Alexandrina (DeMello) Leite and the former wife of the late Arthur D’Aguiar. She was born in New Bedford and was a lifelong resident.  She was a communicant of Our Lady of the Immaculate Conception Church. Mrs. D’Aguiar was employed as a stitcher for various north end clothing companies. She was also a child care provider for 25 years. She enjoyed crocheting. Her family would like to thank Dr. John Niedzwicki, Dr. Daniel Martin and Overlook Services for their kind and compassionate care. Survivors include her daughters Victoria DaSilva and Sandra Camara; her brother Edmund C. Leite; her sister Delfina Machado all of New Bedford. Her grandchildren John Moniz, Dawn Collard, Isaac, Julia and Noah Camara; her great grandchildren James and Austin Collard, Kayleigh and Amanda Moniz and Crystal Oliver; several nieces and nephews. She was the sister of the late Olivia Moura and Irene Machado. Her funeral mass will be said 9am Friday at Our Lady of the Immaculate Conception Church. Visiting hours are Thursday 5-8pm. Burial will be in St. John’s cemetery.

To order memorial trees or send flowers to the family in memory of Carolina D'Aguiar, please visit our flower store.