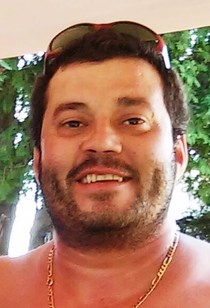 Bedford Charles Moniz 44 of New Bedford passed away Thursday December 11, 2014 at home. He was the husband of Elizabeth (Checkman) Moniz and son of Liliana (Lima) Moniz of New Bedford and the late Joao Moniz. He was born in New Bedford and was a lifelong resident. He was a communicant of Our Lady of the Immaculate Conception Church. Mr. Moniz was a self-employed carpenter who also worked out of Local 1305 Carpenters Union. He was a strong, hardworking person who loved being with his family. He was also known as quite a “jokester”. Survivors include his beloved wife, his mother; his son Nicholas Moniz of New Bedford, his step-son Steven Gilpin of Wareham; his daughters Katie Arruda, Kassie Arruda, Sophie Moniz and Ava Moniz all of New Bedford; his loving sister Gorett Gaipo and his sister Sandra Moniz both of New Bedford, and his granddaughter Aria Rosario. His funeral mass will be said 9am Wednesday at Our Lady of the Immaculate Conception Church. Visiting hours are Tuesday 5-8pm.Burial will be in Pine Grove Cemetery. In lieu of flowers donations can made to his page at gofundme.com/gwknhs

To order memorial trees or send flowers to the family in memory of Charles Moniz, please visit our flower store.