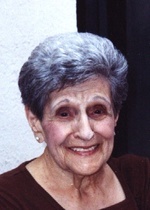 New Bedford Clementina (Rodrigues) Ponte age 90 died peacefully at the New Bedford Jewish Convalescent Home on Sunday January 6, 2013 after a period of declining health. She was the daughter of the late Maria daCruz and Crisostimo Rodrigues and widow of John Ponte to whom she was married for 59 years. A daughter of immigrant parents, Tina left school at an early age and went to work at John I. Paulding, where she worked for 44 years. It was just before WWII, a time filled with economic uncertainty and injustice. During these years, her life became bonded with the hard working immigrants of New Bedford’s mills and factories. It became clear to Tina that she wanted job security, dignity and fairness for her fellow workers and their families. Her work in the UAW and the Democratic Party gave her the tools to be an active voice in her community and to contribute her time and energy toward a better New Bedford and a more equitable society. Tina was a member of the Democratic City Committee serving as Chairperson for several years and was also a member of the State Democratic Committee. She was twice elected to be a delegate at the National Democratic Convention. She worked tirelessly in numerous political campaigns and many of the candidates she supported became lifelong friends. Being appointed to the Board of Trustees at Southeastern Massachusetts University (now U Mass) by Governor Michael Dukakis was a great source of pride for Tina and she served on the board for two terms. After her retirement in 1985, Tina turned her energies to elder and senior issues. She worked at the Council on Aging and worked to get transportation vans for seniors. Tina’s recent years were spent at the Taber Mills apartments, where her dear friends became her second family. There she organized a craft group called the Buzy Bees, a group that made decorations and birthday cards so that all the residents would receive a card on their birthday. Tina will be remembered as a kind, generous, compassionate and caring women who opened her heart to anyone who needed her. She is survived by two daughters, Louise Bizarro and her husband Lawrence of Fairhaven, and Maryann Palestine and her husband Samuel of New Bedford. She is also survived by four grandchildren, John, Neal and Alan Bizarro all of Fairhaven and Sarah Palestine of Durham, NC. Tina is also survived by a brother, Henry C. Rodrigues and his wife Dolores and by a niece Patricia Rodrigues and a nephew Christopher Rodrigues and their families. A memorial mass will be held for Tina at Our Lady of the Immaculate Conception Church in New Bedford at 10:30am on Saturday January 12 th followed by a celebration of her life at the Poirier Post in New Bedford. In lieu of flowers Tina requested that any donations be made to the St. Jude’s Children’s Hospital in Tennessee,

To order memorial trees or send flowers to the family in memory of Clementina Ponte, please visit our flower store.