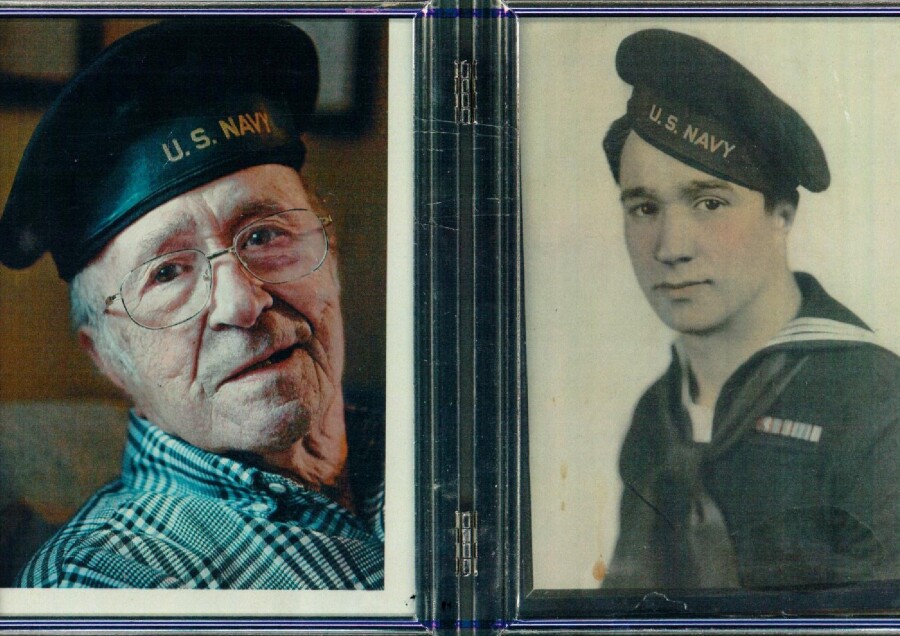 Daniel “Lucky” Lucas, Sr., 98, passed July 9th, at Our Lady’s Haven in Fairhaven. He was born August 1, 1922, in New Bedford, MA at home by midwife to the late Antonio J. Lucas and Henriquetta G. (Dias) Lucas. He had a brother and sister who died of influenza in the 1917 epidemic. At age 6 his family moved to Bridgeport, CT where his father worked in construction and his mother ran a boarding house. Daniel attended many different schools since they moved so often along the East Coast.

While attending high school in Waterbury, CT, Pearl Harbor was bombed. Daniel tried to join the Navy but was rejected because of his age and his father refused to sign for him. Not too long after at the age of 18, he got his father’s consent and the Navy accepted him.

In March 1942, his training began in Newport, RI where he was assigned to gunnery school. He was shipped to the Naval operation center in Virginia and assigned to C.F. Hughes (DD 428). For six months he was at St. Alena barracks and then assigned to the destroyer USS Herndon (DD-638) as first a seaman and then as a deckhand. During this time, he was involved with the invasion of Sicily, Southern France, and the Philippines. Then the Herndon was the lead ship in the Normandy invasion. After Normandy, he returned to Newport, RI for training and then assigned to the USS Venango (AKA-82) as a 3rd class petty officer, coxswain. While on the USS Venango, he unloaded cargo in Pearl Harbor, Okinawa, and the Philippines. He earned 1 Star for good conduct and received “The Sacred Order of the Golden Dragon” when crossing the equator.

After a week in Guam, Daniel was released, and he flew to San Francisco’s Treasure Island. He spent weeks in a cattle car train to get to Lido Beach, Long Island, NY, which is where he was discharged. He then returned to Fairhaven, MA where his wife Anna and son John lived. After his return, they moved to his fathers’ home in Waterbury, CT. He got a job reupholstering couches but since the pay was not enough, he became an apprentice repairing sewing machines.

Daniel and his family moved back to Fairhaven so Anna could care for her father. By that time his second son, Daniel Jr. was born. He worked for a women’s shoe factory, repairing the sewing machines and was able to work his way up to foreman in the men’s shoe factory. But then the recession hit, and the factories closed. He then went to a trade school and became a machinist and earned his journeyman’s license as a tradesman. For the next 18 years he worked as a machinist tool maker at the Continental Screw Co. The company sold out to Japan in 1980 and in 1982 he retired at the age of 59.

Daniel filled his time with sports, fishing, and hunting. He always had a large vegetable garden that he shared with neighbors. He also had many flowers. He definitely had a green thumb and was capable of growing anything.

His wife Anna passed in 1998. He had been the husband of 20 years to Irene (Magalhaes) Lucas.

He was a member of the VFW Post 3260, WWII Memorial, Herndon 638 Reunion Board, and the American Legion.

He is survived by his wife, Irene; sons, Daniel Lucas, Jr. of Fall River and Billy Major of Freetown; daughter, Rebecca McKenna Lucas of New Bedford; granddaughters, Jennifer Hinckley, and husband Chad; Gina Long and husband Cody; special friend Margaret Jamborsky; and many nieces, nephews, cousins, and godchildren. He was predeceased by his first wife Anna (Raphael) Lucas and his son John Lucas.

Visitation will be July 15th from 5-8pm at Boulevard Funeral Home. His Funeral Mass will be held on Friday July 16th at 11:00am at St. Joseph’s in Fairhaven. Burial will follow in the Mass National Cemetery in Bourne.

To order memorial trees or send flowers to the family in memory of Daniel "Lucky" Lucas, Sr., please visit our flower store.