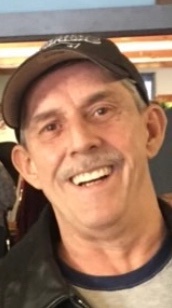 David Rapoza 62 of Fairhaven passed away Monday, September 7, 2020, after a courageous battle with cancer. He was the son of the late Ernest P. Rapoza and the late Catherine Rapoza (nee Gelder). David was born and raised in New Bedford and worked for over 40 years as a press operator at Acushnet Company. He moved to Fairhaven in the early 2000’s. He is survived by his lifetime partner Cheryl Tremblay of Fairhaven and her children Sean and Crystle, his favorite sister Linda Pedro of New Bedford, his brother and sister-in-law Ernest and Paula Rapoza of Fairhaven, his nieces and nephews Jason, Patricia, Gregory, Tracie, Allison and Travis, and his grandchildren Avery, Jenna, Mattie and Madison. A special thanks to David’s cousin, Joanne Rego, who was there every step of the way. His funeral mass will take place at St. Mary’s Church in Fairhaven on Saturday, September 26 at 10am. Arrangements are by the Boulevard Funeral Home 223 Ashley Blvd. For guest book please visit wwwboulevardfh.com. All attendees are required to wear face coverings and practice social distancing. The attendance at the church is limited.

To order memorial trees or send flowers to the family in memory of David Rapoza, please visit our flower store.