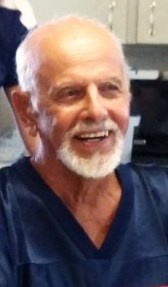 Dennis R. Silva, New Bedford, 82 passed quietly at home with his family by his side after a long illness. Dennis was a native of New Bedford, who spent the last 30 years living in Fort Myers, Florida. Recently he returned home to New Bedford to be with his family. He is survived by his wife Faye (DeMoranville) Silva, his four children; Annette Agrella and her husband Aaron Agrella, Donna Adams-Conahan and her husband Frank Conahan, Donald Adams and his wife Kathy Adams, Kathy McCra and husband Mark McCra; his brothers Bernard Silva and Raymond Silva;  his sister Jackie Furtado; and 8 Grandchildren and 10 great grandchildren. Dennis was predeceased by his parents Janet and Manuel Silva and his grandson Nathan Ricker. He worked as a Correctional Supervisor for the State of Massachusetts for 20 years, serving at Walpole, Taunton State Hospital and Bridgewater Correctional Facilities. Dennis was a Navy Veteran serving on the Ticonderoga CVA-14 1957-1959. He was an active member at Washington Club, helping out with small repairs general events and watching the Patriots play. He enjoyed his morning hugs from his great granddaughter, Layla. An avid Fisherman, his catches are legendary in the South end, often catching fish bigger than a small child. Go Pats! His Memorial Service will be held Saturday, December 7th from 2-5pm at the Washington Club, 90 David Street New Bedford, MA 02744. The family would like to thank Steward Hospice for their kind and compassionate care. In lieu of flowers donations may be made to Steward Hospice 30 Perwal St. Westwood, MA 02090.

To order memorial trees or send flowers to the family in memory of Dennis Silva, please visit our flower store.