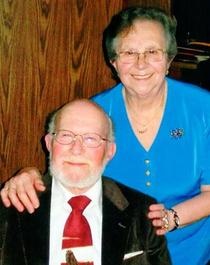 Edmund Francis 83 passed away Saturday June 14, 2014 and his wife Doris H. (Pacheco) Francis passed away Sunday June 29, 2014 both at the New Bedford Healthcare Center. Edmund, born in Acushnet, was the son of the late Edmund and Edna (Hayden) Francis and Doris, born in New Bedford, was the daughter of the late John and Lillian (Menard) Pacheco. They both lived in Fairhaven for many years. Edmund was a shop foreman for Hemmingway Transportation and was also the owner of Eagle Construction. Mr. Francis was a veteran of the U.S. Air force. Mrs. Francis worked at the polls in Fairhaven, during elections. Survivors include their daughter Cheryl Pimentel and her husband John of New Bedford; grandchildren Katie Bravo and her husband Dennis, Celina Pimentel and her fiancé Brad Clattenburg; her great grandson John Bravo; close family friends Dawn and Kirk Franklin and their children Cole, Austin, Paige and Hanna whom they considered they grandchildren; Doris’ nieces and nephews Norbert Dlugosinski, Elaine Strawn, Linda Dlugosinski, Jeff Dlugosinski, Gayle Outtana, John Alexander and Scott Alexander; Several great nieces and great nephews; Mrs. Francis was the sister of the late Lucille Dlugosinski and Simone Francis; Mr. Francis was the brother of the late Donald Francis. A celebration of their lives will be held July 27, 2014 at the Wamsutta Club. For more information please contact the family.

To order memorial trees or send flowers to the family in memory of Doris Francis, please visit our flower store.