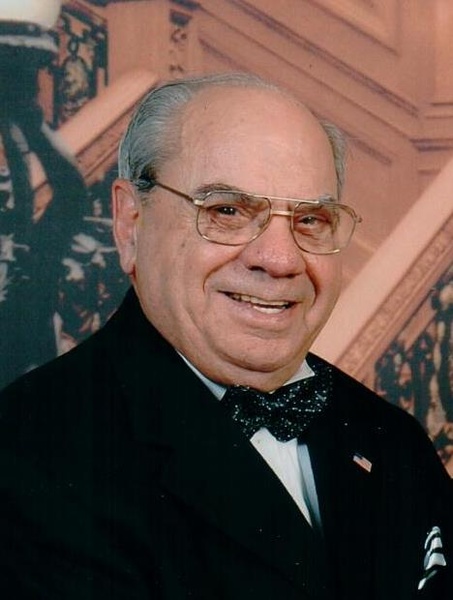 George C. Arruda, 91, passed away peacefully on October 31, 2018, at Sacred Heart Home. He is survived by Hilda Arruda, his wife of 72 years, also a resident of Sacred Heart Home. A lifelong resident of New Bedford, George was happiest when he was around his family and many friends. He served in the United States Navy in 1944 and 1945, and in the National Guard through 1949. He worked at Ted’s Haberdashery through 1956, where he not only honed his sales skills, but also became an expert tailor. He worked for many years as a sales agent at the New Bedford office of Metropolitan Life Insurance, and the New Bedford Standard Times. He then worked for the City of New Bedford in the Department of Public Works until he retired in 1988. Often described as a “people person”, George had a deep sense of commitment to giving back to the community. Always active in civic groups, including the Portuguese-American War Veterans, the Panthers Club, and as longtime Chairman of the Portuguese-American Civic League, he was also very active in local politics in the 1950s and 1960s, and was the New Bedford Coordinator for John F. Kennedy’s Senate campaign in 1952. He and his wife Hilda were communicants of Immaculate Conception Church and were both active in the Couples Club and other church and social groups. He was very proud to be the Parade Marshall of the Feast of the Blessed Sacrament for a number of years. For many years, he and Hilda loved being volunteers at the Fairhaven Council on Aging, organizing many events and acting as tour guides for field trips for seniors. He organized numerous fund raising events for various charitable organizations including Holy Name of the Sacred Heart Church, and was most proud of raising money to fund a permanent memorial to the Portuguese-American Veterans at Buttonwood Park, which stands to this day. He was honored to be named to the Board of the New Bedford Council on Aging where he continued to be an advocate for the needs of the senior community. He is also survived by his son, Kenneth J. Arruda of Boston; his brother, John C. Arruda of Las Vegas; and many cousins, nieces, nephews, grand-nieces, grand-nephews, great grand-nieces, and great grand-nephews. He is preceded by his sisters, the late Olive Rodrigues, Dorothy Duchaine, and Beatrice Monteiro. The family would particularly like to thank the staff of Sacred Heart Home for their loving care of George during the final years of his life. Visitation will be held at the Boulevard Funeral Home,Sunday, November 4, from 3 to 6 pm. The funeral Mass will be on Monday, November 5, at Holy Name of the Sacred Heart of Jesus Church, 121 Mt. Pleasant St., New Bedford, at 11:30 am. Burial will follow at Pine Grove Cemetery, New Bedford. Donations in his memory can be made to Sacred Heart Home, 359 Summer St., New Bedford, MA 02740.
To order memorial trees or send flowers to the family in memory of George Arruda, please visit our flower store.

Holy Name of the Sacred Heart of Jesus Church