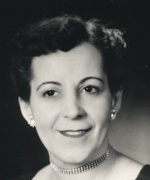 Germina (Pacheco) Medeiros, 92, of New Bedford, passed away on Friday May 20, 2011 at Alden Court. She was the wife of the late Lionel Medeiros and daughter of the late Jose J. Pacheco and Maria (Constantina) Pacheco. Germina was born in Taunton and lived in New Bedford for many years. She was a communicant of Our Lady of the Immaculate Conception church and worked as a stitcher at Bonney Lane Pajama’s until her retirement . Germina was happiest being with her family and cooking Sunday dinner for them. She was an avid Red Sox fan and enjoyed watching them on TV and she will be greatly missed. Survivors include her sons Lionel Medeiros and wife Ginny of New Bedford, Robert Medeiros and wife Diane of Charlotte, NC, brothers Manuel Pacheco of Dartmouth and Edward Pacheco of New Bedford, sister Alice Semiao of Connecticut; her grandchildren Lisa Johnson and Robert Medeiros of North Carolina, Great Grandchildren Emma Medeiros and Riley Johnson, Godchildren Ronald Semiao and Donna Doyle also several nieces and nephews. She was sister of the late Joseph Pacheco, Anibal Pacheco, John Pacheco, and Ethel Courtemanche. Her funeral mass will be held Friday 10:30am at Our Lady of the Immaculate Conception church with burial to follow at Pine Grove Cemetery. Visitation will be private.

To order memorial trees or send flowers to the family in memory of Germina Medeiros, please visit our flower store.