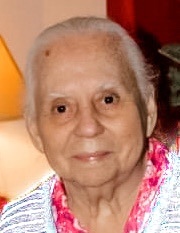 Gloria Flores Montalvo, 89, of New Bedford, passed away on Thursday, January 13th at home with her family by her side. She was the wife of the late Jaime Guzman. Gloria was born in San German, Puerto Rico, to the late Victor Flores and Fara Montalvo. She was a nurse's aide for many years and cherished her family. Gloria is survived by her son, Jaime Guzman and his wife Carmen, daughters, Ivette Guzman and husband Ricardo Negron and Nellie Guzman, grandchildren, James Guzman, Samuel Colon, Glorivette Colon, Miguel Guzman, Ali Guzman, Matthew Guzman, Ivan Rodriguez, Gloriemarie Guzman, Francesca Guzman, and Tyrone Williams, and greatgrandchildren, Xavier, Uzyelle, Gabriel, Myla, Arya, and Issac. She was predeceased by her husband and her brother Victor Flores. A Funeral Service will be held on Tuesday, January 18th at Boulevard Funeral Home at 10am, with burial to follow in Pine Grove Cemetery. A visitation for Gloria will be held Monday, January 17th, from 5pm - 8pm at Boulevard Funeral Home, 223 Ashley Boulevard, New Bedford.

All attendees are asked to wear a face covering.

To order memorial trees or send flowers to the family in memory of Gloria Montalvo, please visit our flower store.