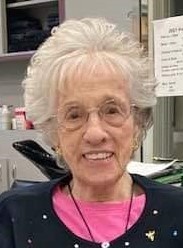 Gloria J (Rousseau) Sylvia, 97, of Fairhaven, passed away peacefully at home on Saturday, February 26, 2022. Born in New Bedford, she was the daughter of the late Alphonse and Emma Rose Yvonne (Lilevre) Rousseau and wife of the late Alfred W. Sylvia Jr. Gloria worked for many years as a machine operator. She is survived by her son, Alfred W Sylvia and wife, Lorraine of Rumford, ME; daughters, Dorothy Manny and husband, Roland of Kinston, NC, Jacqueline Marashio and husband, Paul of Fairhaven; 7 grandchildren, 4 great grandchildren and 5 great great grandchildren. Gloria is preceded in death by her brothers, Roger Rousseau, Norman Rousseau, Lucien Rousseau, and George Rousseau and her daughter Alyce Voisine. Her Funeral Mass will be held Thursday, March 3, 2022 at 9:15am at St. Joseph's Church in Fairhaven, burial will follow in Veterans National Cemetery in Bourne.

To order memorial trees or send flowers to the family in memory of Gloria Sylvia, please visit our flower store.