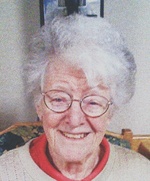 Helen A. (Jones) Leach 94 of South Dartmouth passed away Friday January 18, 2013 at the Hathaway Manor. She was the widow of Charles H. “Buddy” Leach Jr. and daughter of the late Clarence H. and Margaret H. (Brady) Jones. She was born in Fall River and had lived in South Dartmouth for many years. Mrs. Leach was a licensed practical nurse working at St. Luke’s hospital, Tabor St. Nursing Home, Harborview Nursing Home, New Bedford Jewish Convalescent Home and private duty. She was also licensed in Florida. Survivors include her son Charles H. Leach III of Mansfield, MA; her daughter Nancy J. Smith and her husband Howard of North Dartmouth; her grandchildren Robert, Randy, Roy and Rebecca Harrison and their children; Katherine Smith O’Donnell her husband Christopher and their children Erin, Molly and Ryan; Jonathan Smith his wife Kate (Martelly) Smith and their children Jack and Sam; and Charles H. Leach IV. She was the mother of the late Carol A. Harrison. She was also the sister of the late Fred A. Jones, Clarence H. Jones Jr., James W. Jones, Alice Clouch, Dorothy Costa, Lillian, Jenny, Florence and Grace. Also many nieces and nephews. In accordance with her wishes she will be cremated.

To order memorial trees or send flowers to the family in memory of Helen Leach, please visit our flower store.