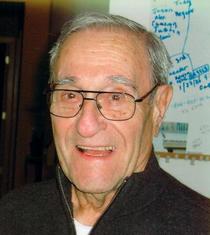 Henry C. Rodrigues 90 of New Bedford passed away peacefully Thursday November 13, 2014 at St. Luke’s Hospital. He was the husband of Dolores (Bernardo) Rodrigues and son of the late Chrisostimo and Maria (Cruz) Rodrigues. Born in New Bedford he was a lifelong resident. Henry was a communicant of St. Mary’s Church in New Bedford. He was a Certified Public Accountant at Rodrigues, Guckin and Tobojka, which later became Burke and Lamb PC. He was a graduate of Boston University, a member of the Prince Henry Society, a life member of the Mass. Society of CPA’s, former trustee of Citizens Bank, very active in the Cursillo movement of LaSalette; he was a founding member of the Fr. Fortuna Scholarship Fund. He was also a member of the Knights of Columbus, Serra Club and the Kiwanis Club. Henry served in the U.S. Army during WWII. Survivors include his wife; his son Christopher Rodrigues and his wife Ann of New Bedford; his daughter Patricia Hsue MD and her husband K-Yuen Hsue MD of Mercer Island, Washington; his grandchildren Amanda Rodrigues, Lauren Hsue and Noah Hsue; his sister-in-law Sandra Bernardo of New Bedford; his nieces Maryann Palestine of Fall River, Louise Ponte of Fairhaven; cousins Joe and Ann Lopes of Milford, MA; Tony and Bernadette Simoes of New Bedford. His funeral mass will be said 9:30am Saturday, November 22, 2014, at St. Mary’s Church, New Bedford. Cremation will follow. Visiting hours are Friday, November 21, 2014, 5-8pm. In lieu of flowers donations may be made to the Prince Henry Society for the Fr. Fortuna Scholarship; Bishop Stang Scholarship Fund or any other scholarship fund.

To order memorial trees or send flowers to the family in memory of Henry Rodrigues, please visit our flower store.