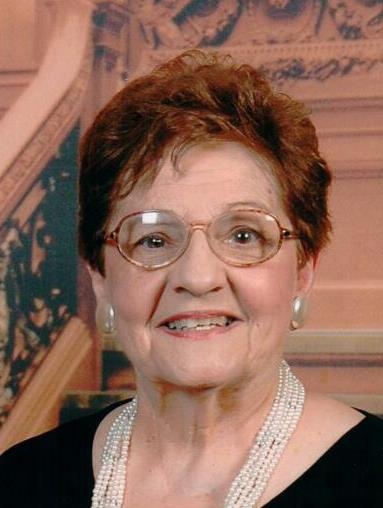 Hilda (Rego) Arruda, 93, passed away peacefully on January 2, at Sacred Heart Home. She was the widow of George C. Arruda who passed away October 31, 2018. Hilda and George were married in 1946 and celebrated 72 anniversaries together. A lifelong resident of New Bedford, Hilda was happiest when she was around her family and many friends. After graduating from New Bedford High School in 1945, she worked as an office clerk spending many years at the Acushnet Company, before working for the City of New Bedford in the Department of Public Works Office until her retirement in 1985. Hilda had the gift of making conversation, connecting with people, and making friends easily. She was always quick to reach out to family and friends when they needed a friendly voice of support, or to bring homemade soup when they were sick. Taking care of people and giving of herself just came naturally to her. She made a concerted effort to keep in touch with many of the people she became friends with along her life’s journey, even making lifelong friendships with people she met while on a vacation. She rarely missed sending a birthday or Christmas greeting to everyone she called a friend. Hilda loved parties and gatherings with friends and relatives and especially enjoyed volunteering for various church and fund raising events. She and George also loved to dance and when they took to the dance floor, all eyes were on the happy couple. During their younger years, they were longtime communicants of Immaculate Conception Church and were both active in the parish Couples Club and other church and social groups. In their later years Hilda and George loved being volunteers at the Fairhaven Council on Aging, organizing many events, being tour guides for field trips for seniors, and helping organize numerous fund raising events for various charitable organizations including Holy Name of the Sacred Heart Church. She is survived by her son, Kenneth J. Arruda of Boston; and many cousins, nieces, nephews, grand-nieces, grand-nephews, great grand-nieces, and great grand-nephews. She is preceded by her brother Leonard Rego, formerly of Westport. The family would particularly like to thank the staff of Sacred Heart Home for their loving care of Hilda during the final years of her life. Visitation will be held at the Boulevard Funeral Home, 223 Ashley Boulevard, New Bedford, on Thursday, January 9, from 4 to 7 pm. The funeral Mass will be on Friday, January 10, at Holy Name of the Sacred Heart of Jesus Church, 121 Mt. Pleasant St., New Bedford, at 11:00 am. Burial will follow at Pine Grove Cemetery, New Bedford. Donations in her memory can be made to Sacred Heart Home, 359 Summer St., New Bedford, MA 02740.
To order memorial trees or send flowers to the family in memory of Hilda Arruda, please visit our flower store.

Holy Name of the Sacred Heart of Jesus Church