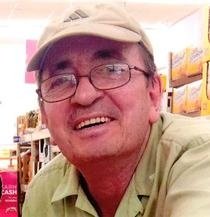 Horacio Sampaio, 63, of New Bedford passed away March 10, 2016 at Hathaway Manor. He was the son of the late Lidia and Jaime Sampaio and former husband of Lucia (Medeiros) Sampaio. Born in Beira Grande, Portugal, Horacio came to New Bedford in 1981 where he was a resident since. He was a restaurant manager at Vivara Restaurante and a member of the Clube Sport Madeirense. Survivors include his daughter Stacy Sampaio of New Bedford; son Danny Sampaio of Acushnet; Brother Jaime Sampaio of New Bedford; Sisters Leonor Galvao, Stella Costa, and Zinha Medeiros all of Canada; Grandchildren Aidan L Sampaio, Mason S Resendes, and Logan S Resendes; & Many nieces and nephews. Horacio is predeceased by his late sister Carolina Lima. His Funeral Mass with his Cremains present  will be held on Monday, March 21 at 9:00AM at Our Lady of the Immaculate Conception Church, everyone is asked to meet at the Church. Burial will follow in Acushnet Cemetery. Visiting Hours will be Sunday from 5-8PM.

To order memorial trees or send flowers to the family in memory of Horacio Sampaio, please visit our flower store.