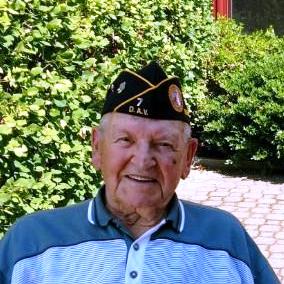 Joaquim “Jack” Pacheco 99 of Fairhaven, formerly of New Bedford, passed away Thursday February 6, 2020 at St. Luke’s Hospital. He was the husband of the late Alzira “Elsie” Pacheco and son of the late Ximenes and Eduarda (Marques) Pacheco. He was born in New Bedford and was raised in Portugal. Jack was a communicant of Our Lady of the Immaculate Conception Church. He was the proprietor of Jack’s Auto Body for many years. He was a proud WW II veteran serving in the United States Army, earning the rank of Corporal. Jack was a life member of the Panthers Athletic Club, he was also a life member and past president of the Portuguese American Athletic Club, he was also a member of the American Portuguese War Veterans Post 1, DAV Chapter Dr. C.E. Burt #7 and the Panthers Golden Agers. Survivors include his sister-in-law Mary Bernardo of RI and many nieces, nephews and Godchildren. He was the brother of the late Adelia Gradiz of Brazil. His family would like to thank the staff of Atria Fairhaven, St. Luke’s Hospital and South Coast Hospice for the care that was given to Jack. His funeral mass will be said 9am Tuesday February 11 at Our Lady of the Immaculate Conception Church and his visiting hours are Monday, February 10, 4-7pm at the Boulevard Funeral Home 223 Ashley Blvd. Burial will be in Pine Grove Cemetery. In lieu of flowers donations may be made to DAV Chapter: Dr. C.E. Burt #7 19 Willis St. New Bedford, MA 02740.

To order memorial trees or send flowers to the family in memory of Joaquim Pacheco, please visit our flower store.