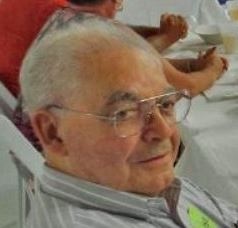 Jose “Joe” Gouveia Jr. of New Bedford passed away September 11, 2019. Joe was born in Cambridge, Mass. in 1931 and was the son of the late Jose and Maria (Viera) Gouveia Sr. and late sister Alice. He lived in New Bedford most of his life and graduated from New Bedford High School Class of 1949. In 1950 he graduated from Portsmouth Abbey where Joe made Allstate in football and baseball. He then attended Brown University on a scholarship and later went on to graduate from Bryant College with a degree in business. Joe also served his country for two years in the U.S. Army stationed overseas in Germany. Joe married Pauline M. Poirier on May 28, 1954 and joined his dad in Gouveia & Son Imports and Exports. He was also owner of the ship M/V Pauline Marie and began operating Portuguese American Export Line in 1975. In 1985 he became CEO and Chairman of Luzo Community Bank which sold to Bank 5 in 2007. Joe was an avid Boston sports fan all of his life and enjoyed fishing. Joe is survived by his wife, one son and two daughters: Anne-Marie Remendos of New Bedford, Kathie Perron of Connecticut, and Jose “Joe” Gouveia III and his wife Joanne of Fairhaven, and four grandchildren, Kimberly, Jonathan, Jedediah and Cheyenne. In lieu of flowers, donations may be made to the Veterans Transition House 20 Willis St. New Bedford, MA 02740. Visiting hours will be Sunday September 15 from 4-7pm. Burial will be private.
To order memorial trees or send flowers to the family in memory of Jose "Joe" Gouveia Jr., please visit our flower store.