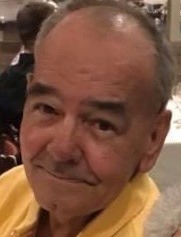 Joseph T. Amaral 76 of New Bedford passed away suddenly on Friday, August 14, 2020 at his home. He was the son of the late Antonio T. and Maria (Medeiros) Amaral. He was born in St. Michael, Azores and had lived in this area for many years. Joseph was employed as a machine operator for Isotronics and Acushnet Co. until his retirement. He was a former member of the Portuguese Sports Club; he enjoyed reading and sports, especially basketball and the Boston Celtics. Survivors include his son Aaron Amaral of Somerset, his daughter Sarah Amaral and her partner Thaddeus Montoya of Middleboro, his brothers Manuel T. Amaral and his wife Joann of Florida, Edward M. Amaral and his wife Robin of Acushnet, his sister Maria Cardoso of New Bedford, his grandson Gabriel Amaral also many nieces, nephews and cousins. He was the brother of the late Gloria Rodrigues and her husband Donald, Natalie McDermott and her husband James. He was also brother-in-law to the late Antonio Cardoso. In lieu of flowers donations may be made to the American Red Cross PO Box 37839 Boone, IA 50037-0839 or United Cerebral Palsy 71 Arsenal St. Watertown, MA 02472. His funeral services will be held at a later date.

To order memorial trees or send flowers to the family in memory of Joseph Amaral, please visit our flower store.