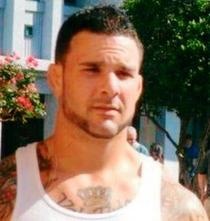 Joseph DeChaves Jr. 30 of East Freetown passed away, at home, on Sunday February 15, 2015. He was the son of Susan (Cote) DeChaves of East Freetown and the late Joseph DeChaves. He was born on New Bedford and had lived in East Freetown for many years. Joseph was formerly employed for the sheriffs dept. as a guard and as a family counselor for dept. of youth services. He was a U.S.. marine Corp veteran, earning the rank of Lance Corporal and serving 2 tours of duty in Iraq. Survivors include his mother, his daughter Miah Grace DeChaves of Dighton; his sisters Anne Marie and Sarah; his maternal grandmother Margaret Cote of New Bedford; also many aunts, uncles and cousins. He will be buried with military honors at the Veterans National Cemetery in Bourne, MA. His visiting hours are Friday 10am - 12pm when his funeral service will begin.

To order memorial trees or send flowers to the family in memory of Joseph DeChaves Jr., please visit our flower store.