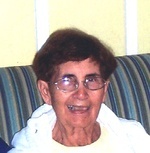 Laura (Costa) Souza 86 of New Bedford passed away Monday November 12, 2012 at the Hathaway Manor. She was the wife of the late Alfredo Souza, who passed away August 20, 2012. She was also the daughter of the late Manuel N. and Maria (Fernandes) Costa who immigrated to New Bedford from the island of Madeira. She was born in New Bedford and lived here for most of her life and also in Florida for several years. She was a communicant of Our Lady of the Immaculate Conception Church. Mrs. Souza was formerly employed as a customer service representative for Bay Bank until her retirement. Survivors include her daughters Kathleen Laramie and her husband Kim Laramie of Oak Hill, FL; Christine Miller and her husband Dr. Andrew Miller of Providence, RI; Nancy Sue and her husband Dr. Jeffrey Sue of Honolulu, HI; Theresa Ahlers and her husband Robert Ahlers of East Wallingford, VT.; her sister Celeste Mendonca of CA; 9 grandchildren, 9 great grandchildren, 3 great-great grandchildren, many nieces and nephews. She was the brother of the late John Costa. Her funeral mass with her cremated remains present will be said 9:00am Monday at Our Lady of the Immaculate Conception Church. Visiting hours are Sunday 5-7pm. Burial will be in the Veterans National Cemetery in Bourne, MA. In lieu of flowers donations can me made to the American heart Association or to the charity of one’s choice

To order memorial trees or send flowers to the family in memory of Laura Souza, please visit our flower store.