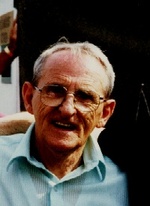 Leo Gagnon 85 formerly of Dartmouth passed away June 30, 2012 at the Life House Nursing Home in Vista, CA. He was the husband of the late Cecelia (Viveiros) Gagnon and son of the late Alfred and Palma (Brodeur) Gagnon. He was born in New Bedford and had lived in this area most of his life. Mr. Gagnon was formerly employed as an inspector at Chamberlain until his retirement. He was a WWII U.S. Navy Veteran. He was a member of the UAW 113 Local 9. Survivors include his son Bradford A. Gagnon of CA; his grandaughter Britt M. Gagnon of Springfield, Ma ; many nieces and nephews. He was the father of the late David B. Gagnon, and brother of the late Omer A. Gagnon, Maurice Gagnon, Yvonne Aubin and Juliette Murphy. His services will be private.

To order memorial trees or send flowers to the family in memory of Leo Gagnon, please visit our flower store.