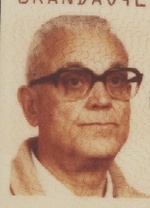 Liberal Brandao, 87 of Wareham passed away Wednesday March 6 th , 2013 at the Tremont Rehab and Skilled Care Center. He was the son of the late Artur Brandao and Late Maria DoCarmo. Liberal was born in St. Michael, Acores and came to the United States 29 years ago. He was a maintenance worker in the textile industry.

Liberal is survived by his son Jorge Brandao and wife Maria of Florida; Daughter Lucia Carreiro and husband Silvino of Florida; his grandchildren Jimmy Moura, Kelly Bento, Kevin Moura and Sabrina Brandao; and many great grandchildren.

The services for Liberal will be held on Monday March 11 th at 12pm at the Boulevard Funeral Home 223 Ashley Blvd New Bedford. Burial will be in Pine Grove Cemetery. Visiting hours will be Monday morning from 11-12pm.

To order memorial trees or send flowers to the family in memory of Liberal Brandao, please visit our flower store.