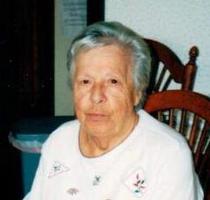 Private services will be held for Ludwina (Nicolau) Pequita 96 of New Bedford who passed away on Monday April 14, 2014 at the Sacred Heart Home. She was the wife of the late Manuel “Perky” Pequita and daughter of the late Francisco and Maria Gloria Nicolau. She was born in Fall River and lived in New Bedford since her marriage. She was formerly employed as a folder/inspector for various textile companies. She was a volunteer at Sacred Heart Home in the activity dept. for many years. She made and distributed numerous afghans to various nursing homes and charitable organizations. Survivors include her daughter Carol Turner and her husband Douglas of New Bedford; her son Edward Pequita and his wife Lori of Woodstock, GA; her grandchildren Scott Turner and his wife Mylissa of Stoughton, MA, Michael Turner and his wife Chantal of Stow, MA, Kristine McCracken and her husband Jay of Falmouth, MA and the late Jacqueline Pequita. Her great grandchildren Molly, Lindsay, Vianne, Rachel Turner and Sophia Borges. Her sister Aldina Rapoza of Fall River; her brother Manuel Nicolau of Florida. Remembrances in her name can be made to Sacred Heart Home Activity Dept. 359 Summer St. New Bedford, MA 02740 or St. Andrews Episcopal Church 169 Belleville Rd. New Bedford, MA 02745.

To order memorial trees or send flowers to the family in memory of Ludwina Pequita, please visit our flower store.