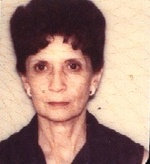 Mabel (Rebello) Lopes 91 of New Bedford passed away Sunday December 16, 2012 at St. Anne’s Hospital. She was the widow of Americo “Mac” Lopes and daughter of the late Benjamin and Sabina (Souza) Rebello. She was born in Portugal and had lived in New Bedford for most of her life. Mabel was formerly employed by the city of New Bedford as a clerk for the election commission until her retirement. Survivors include 3 grandchildren including Thomas Lopes Jr. and his daughter, Mabel’s great granddaughter, Nicolette Dubois. Also her daughter-in-law Sheila Lopes. She was the mother of the late James Lopes and Thomas Lopes, who both passed away this year. At the request of her family she will be cremated and her burial will be held Tuesday January 15, 2013 at 1pm in the chapel at St. John's cemetery.

To order memorial trees or send flowers to the family in memory of Mabel Lopes, please visit our flower store.