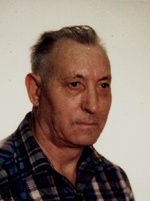 Manuel A. Borges 84 of New Bedford passed away Friday July 6, 2012 at St. Luke’s hospital. He was the husband of Ana (Machado) Borges and son of the late Antonio doBarros Coutinho and Maria daGloria Borges. He was born in Villa Reale, Portugal and had lived in New Bedford for 32 years. He was a communicant of Our Lady of the Immaculate Conception Church. Mr. Borges was employed by New Bedford Plating as a machine operator until his retirement. Survivors include his wife; his sons Jose Borges of Westport, Jose Antonio Borges and Joaquim Machado Borges both of Portugal; his daughter Leticia Alves of New Bedford; his brother Joaquim Alves of Portugal; his sister Maria Jose Alves of Portugal; 11 grandchildren, 3 great-grandchildren, many nieces and nephews. He was the father of the late Joaquim Borges and Maria Taveira. His funeral mass will be said 8:45am Tuesday at Our Lady of the Immaculate Conception church. Visiting hours are Monday 5-8pm. Burial will be in Sacred Heart cemetery

To order memorial trees or send flowers to the family in memory of Manuel Borges, please visit our flower store.