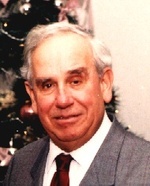 Manuel F. Correia 84 of New Bedford passed away Sunday April 1, 2012 at St. Luke’s hospital. He was the husband of the late Olive (Rebello) Correia and son of the late Joseph and Maria (Couto) Correia. He was born in New Bedford and was a lifelong resident. He was a communicant of Our Lady of the Immaculate Conception Church. Mr. Correia was the proprietor of Correia’s Towing Service since 1938. He was a U.S. Navy veteran serving in WWII. He was a member of the Madeira Feast committee in 1953 and 1972. Manny enjoyed watching his grandsons play baseball, football and hockey. He was a devoted Red Sox fan and enjoyed going to their games with his family. He loved spending time with his grandsons talking about WWII and the “old days”. He was very proud of being a Navy veteran. He also enjoyed traveling to Madeira and Portugal with his niece Louise and nephew Wayne. His family would like to thank his devoted personal care giver, whom he thought of as a daughter. Survivors include his sons Michael Correia and his wife Candie, Mark Correia, Phillip Correia; his daughter Susan Rodrick and her husband Arthur all of New Bedford; his sisters Hazel Konorosky of Virginia, Josephine Siwik and her husband Ronald of New Bedford, Pat Chopoorian and her husband Jack of Portsmouth, RI; his grandsons Michael Correia II and his wife Amy, Curtis Rodrick and Warren Rodrick all of New Bedford; also several nieces and nephews. He was the father of the late Paul Correia and brother of the late Alice Psota, Mary Fortuna and Joseph Correia. His prayer service will be held 9am Saturday. A visiting hour will be 8-9am Saturday. His pro burial mass will be held Thursday June 28, 2012 at Our Lady of the Immaculate Conception Church at 6pm. Burial will be in Sacred Heart cemetery. In lieu of flowers donations may be made to the Veterans Transition House 20 Willis St. New Bedford, MA 02740.

To order memorial trees or send flowers to the family in memory of Manuel Correia, please visit our flower store.