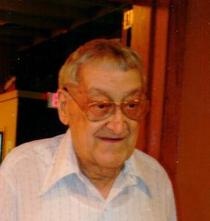 Manuel Freitas 91 of New Bedford passed away Tuesday November 18, 2014 at St. Luke's Hospital. He was the husband of Lea (Henriques) Freitas and son of the late Antonio and Mary (Caires) Freitas.  Born in New Bedford Mr. Freitas was a life long resident. He was a communicant of Our Lady of Fatima Church. He was formerly employed by Parkwood Hospital as a security guard until his retirement. He was also a bartender at Montes Cocktail Lounge in New Bedford. Mr. Freitas served in the U.S. Army during WWII. Surviviors include his wife; his daughters Diana Kessinger and Lea Durocher both of New Bedford; 5 grandchildren, 6 great-grandchildren also many nieces and nephews. Visiting hours are Thursday 4-8pm. Burial will be private.

To order memorial trees or send flowers to the family in memory of Manuel Freitas, please visit our flower store.