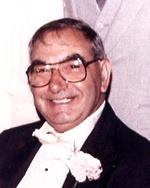 Manuel Rodrigues Inacio 95 of New Bedford passed away Tuesday June 26, 2012. He was the husband of Olidia (Nunes-Cardoso) Inacio and son of the late Jose Rodrigues Inacio and Maria Jesus (Santinho) Inacio. He was born in Villa Franca da Serra, Portugal and has lived in New Bedford since 1948. Mr. Inacio was a communicant of Our Lady of the Immaculate Conception church. He was formerly employed by Aerovox as an assembler and then in the construction industry until his retirement. Survivors include his wife, his children Carlos Manuel  Inacio and his wife Patricia of  Darien, Georgia, John Wayne Inacio and his wife Connie of Natick, MA, Zaida “Zee”  Inacio Bryant and her late husband Peter of New Bedford; his grandchildren Carlos Inacio Jr. and his wife Jennifer, Patrick Inacio and his wife Angela , Christopher Inacio and his wife Denise, Becky Bryant and her partner Donald, Barry Bryant and his wife Amy, Brad Bryant and his wife Sara, Nicholas Inacio; 8 great grandchildren; nieces and nephews here and in Portugal. He was the brother of the late Amalia Gomes and Emilia Felicio. His funeral mass will be said Saturday at 9am at Our Lady of the Immaculate Conception Church. Visiting hours will be Friday 4-8pm. Burial will be in Pine Grove Cemetery.

To order memorial trees or send flowers to the family in memory of Manuel Inacio, please visit our flower store.