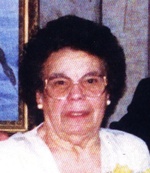 Maria Matilde (Costa) Lima 93 of New Bedford passed away at the Royal of Fairhaven on Tuesday October 16, 2012. She was the widow of Arthur F. Lima and daughter of the of the late Jose Inacio DaCosta and Maria Pereira deMedeiros. She was born in St. Michael, Azores and had lived in New Bedford since 1961. She was a communicant of Our Lady of the Immaculate Conception church. She was formerly employed as a waist maker at Jody Sportswear and Elco Sportswear. She was a member of the Holy Rosary Sodality of her church and a longtime member of Nossa Senhora da Ajuda. Survivors include her daughters Gabriela DaCosta Baptiste of Fall River, Matilde G.L. Botelho of Dartmouth and Maria J. “Zita” Lima Simas of New Bedford; her sister Adelaide DaCosta of Canada; 11 grandchildren, 5 great grandchildren. She was the grandmother of the late Caroline Marie Simas. She was also the sister of the late Jose Inacio DaCosta. Her funeral mass will be held Friday at Our Lady of the Immaculate Conception church at 10:30 am. Visiting hours will be Thursday 5-8pm.Burial will be in St. John’s cemetery.

To order memorial trees or send flowers to the family in memory of Maria Lima, please visit our flower store.