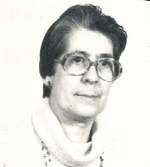 Maria Leontina (Gregory) Rafael 84 of New Bedford passed away Sunday July 11, 2010 at St. Luke’s hospital. She was the wife of the late Manuel dos Santos Rafael and daughter of the late Joao Medeiros Gregory and Isabel da Conceicao Gregory. She was born in Sao Roque, Ponta Delgada and had lived in this area for 45 years. She was a communicant of Our Lady of the Immaculate Conception church. Survivors include her son Jose M. Rafael and his wife Matilde and her daughter Manuela Castro and her husband Victor all of New Bedford; her grandchildren Stephen Castro, Vanessa Castro, Jeffrey Rafael and the late Sandy Rafael da Cruz; several great-grandchildren, sisters–in-law, nieces and nephews. Her funeral mass will be said 9am Wednesday at Our Lady of the Immaculate Conception church. Visitation will be Tuesday 6-8pm. Burial will be in Pine Grove cemetery. In lieu of flowers donations can be made to the Alzheimer Association 311 Arsenal St. Watertown, MA 02472.

To order memorial trees or send flowers to the family in memory of Maria Rafael, please visit our flower store.