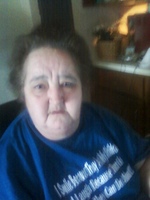 Paula L. Breau 60 of New Bedford passed away Friday April 15, 2011 at St. Luke’s hospital. She was the daughter of the late Romeo and Estella (Morrell) Breau. She was born in Acushnet and had lived in this area all of her life. She was formerly employed at Alfie’s Place as a bartender for 27 years. She was an organ donor. Survivors include her sisters, Pauline Correia, who was also her twin, Juliette Carreiras and Marie Smith all of New Bedford. Several nieces and nephews including Brandon, Jayme, Bradley and Jenna Correia. She was the sister of the late Barry and Romeo Breau. Her funeral service with her cremated remains present will be held Monday 10am.

To order memorial trees or send flowers to the family in memory of Paula Breau, please visit our flower store.