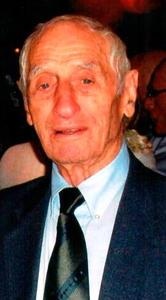 Paulino Vieira 99 of New Bedford passed away Friday September 13, 2013 at the Beth Israel Deaconess Medical Center. He was the husband of the late Ana (Dias) Vieira and son of the late Francisco Fernandes Vieira and Ana Goncalves Rocha. He was born in Montalerge, Portugal and had lived in New Bedford for many years. Mr. Vieira was a communicant of Our Lady of the Immaculate Conception Church. He was formerly employed as a machine operator for Knapp Shoe until his retirement. Survivors include his sons, Manuel Fernandes and his wife Maria of Acushnet, Antonio Dias Vieira and his wife Berta of Portugal, Paulino Francisco Dias Vieira and his wife Maria of North Dartmouth, Americo Vieira and his wife Janice of New Bedford; his daughters Maria Francisco of New Bedford, Conceicao Lima and her husband Tony of Acushnet, Judite Lopes of New Bedford; 18 grandchildren, including Americo Rocha whom they raised as their own son; 11 great-grandchildren; several nieces and nephews. He was the father of the late Ana Dias Vieira Rocha, grandfather of the late Michael Fernandes, brother of the late Joana Fernandes and Ana Fernandes. His funeral mass will be said Tuesday 10:30am at Our Lady of the Immaculate Conception Church. Visiting hours are Monday 4-8pm. Burial will be in Pine Grove Cemetery.

To order memorial trees or send flowers to the family in memory of Paulino Vieira, please visit our flower store.