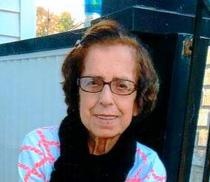 Susana (DaSilva) Monteiro 79 of New Bedford passed away Sunday March 20, 2016 at Charlton Hospital. She was the wife of the late Domingos Furtado Monteiro and daughter of the late Joseph and Conceicao (Pedro) DaSilva. She was born in St. Michael, Azores and had lived in this area for many years. Mrs. Monteiro was a communicant of Our Lady of the Immaculate Conception Church. She was formerly employed as a stitcher at Cliftex for 46 years. Survivors include her daughter Lucilia Correia and her husband Joe of North Dartmouth; her brothers Tomas DaSilva of New Bedford and Jose DaSilva of Canada; her grandchildren Lyndsay Picaro, Jessica Picaro, Joseph Correia and Johnathan Correia; her great grandchildren Ryleigh Turner and Elyjah DeMelo; also several nieces and nephews. Her funeral mass will be said 9am Wednesday at Our Lady of the Immaculate Conception Church. Visiting hours are Tuesday 5-8pm.Burial will be in Pine Grove Cemetery.

To order memorial trees or send flowers to the family in memory of Susana Monteiro, please visit our flower store.