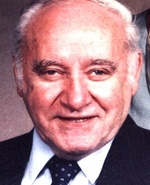 Victor Novo 89 of New Bedford passed away at home on Sunday November 18, 2012, surrouned by his family and friends. He was the husband of Eugenia "Jenny" (Souza) Novo and son of the late Manuel and Anna (Oliveira) Novo. He was a lifelong New Bedford resident. He was a communicant of the Holy Name of the Sacred Heart of Jesus Church. Mr. Novo was formerly employed as a meat cutter at the A&P until his retirement; he was also a self employed TV repairman. He was very active in the Couples Club of his church, the Lions Club and the Knights of Columbus. Mr. Novo was a WWII veteran serving in the U.S. Army. Survivors include his wife; his daughter Gail Coble of Marion; his sons Victor Novo Jr. of Fairhaven, David Novo of New Bedford; his grandchildren Matthew and Trevor Coble, Vanessa, Meghan and Anna Novo, Lindsey Bariteau, Hannah, Nick, Trevor, Korey and Timothy Novo, Joshua Hathaway; his great grandchildren, Abigail Triano-Novo, daughter of Anna Novo, Carter Cook son of Vanessa and US Marine Capt. Derek Cook; also several nieces and nephews. He was the brother of the late Celia Medeiros and Deolinda Vieira. His funeral mass will be said 9am Monday at the Sacred Heart of the Holy Name of Jesus Church. Visiting hours are Sunday 6-8pm. In lieu of flowers donations can be made to the Veterans Transition House 20 Willis St. New Bedford, MA 02740. Burial with military honors will be in the Veterans National Cemetery, Bourne, MA.

To order memorial trees or send flowers to the family in memory of Victor Novo, please visit our flower store.